Faster than the speed of light

So this could be big news. Perhaps the biggest. A team of scientists at CERN announced that they had recorded particles moving faster than the speed of light. This is not supposed to be possible according to physics's main man, Alfred Einstein. And when I say "not supposed to be possible," I don't mean like a two-headed goat. I mean that it is physically not possible in the accepted model of how our universe actually works.

The constant speed of light is the backbone of Einstein's Relativity, which is in turn pretty much what physics has been all about for going on 100 years. It's the "C" in E=MC2, which describes nuclear bombs and reactors, and the workings of the sun. The effects of Relativity have been proven over and over again. Without accounting for Relativity, your GPS would be off 6 miles a day. It's why gold is colored gold (I like this article, but sorry about the poems). Relativity is real.

If things are traveling faster than the speed of light, though, where does that leave Einstein's equations? If the history of physics is a game of king of the hill, Einstein knocked Newton off the mound. Einstein has been king ever since, but that doesn't necessarily mean he'll be king forever.

If true, this discovery changes everything.

The proof arrived today. An actual, real book with my name on the cover. 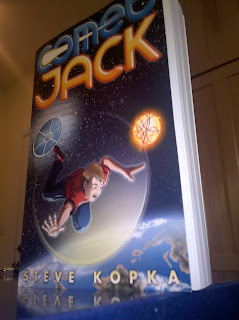 The cover looks great, as I pretty much knew it would. (Cover by Chicago illustrator Phineas X. Jones.) I did the interior layout, relying heavily on Scrivener's awesome compile features. There was a small issue with page numbers--I'd told Scrivener to skip numbering one of the "front matter" pages, which threw off the pages. My first upload had even-numbered pages on the right, which apparently is Not Done.

I fixed that, sent the files off, and a few days later... Look what's in my kitchen! A trade paperback of my novel.

Oh, yeah: copies will be available for purchase soon, and I will definitely let everyone know! First I need to check this thing over to make sure I didn't accidentally paste the text of some old paper on William Blake or a recipe for blue cheese burgers in the middle somewhere.

All this stuff takes a little more time than I first thought, which is the case with absolutely everything about writing. It shouldn't surprise me that the same is true with publishing.

I've sent the files to CreateSpace, where they will turn it into a Real Life Book With Pages And Everything. I needed to format the interior first, which was fun. I learned about gutters. I played around with spacing. I tried about 25 different versions before I settled on something I thought looked great. One of my biggest problems is that I didn't want a chapter to end with just a single line at the top of the page. It looked lonely and out of place up there. When I was satisfied, I finally knew how many pages the interior of my book had.

You have to know how many pages inside before you can work on the cover, because before that you don't know how thick the spine is.

Phineas X. Jones did the print cover too, and I must say it's awesome. Here's what the artwork looks like. 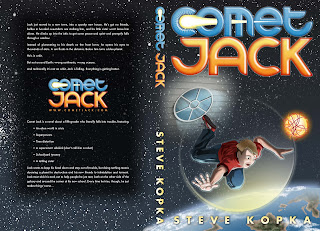 I'm not sure how long the rest of the process will take, but I am that much closer to offering trade paperbacks. Sit tight! And read the eBook in the meantime. Download a free sample here: