Kindle
or in Paperback *

Jack just moved to a new town, into a spooky new house. He's got no friends, sweatshirt-hooded bullies are stalking him, and his little sister won't leave him alone. He climbs up into the attic to get some peace and quiet and promptly falls through a window. 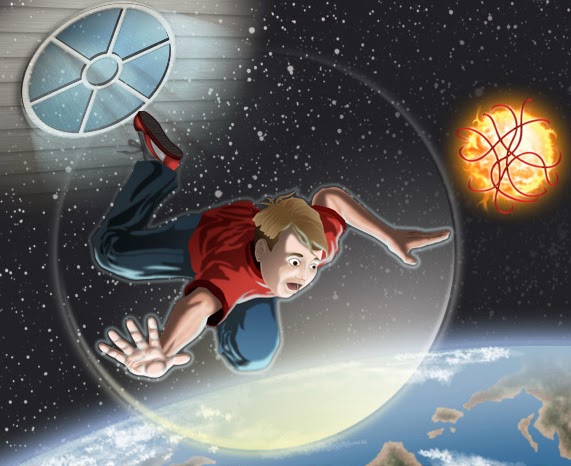 Instead of plummeting to his death on the front lawn, he opens his eyes to thousands of stars. A sun floats in the distance. Below him turns a blue planet.

But not around Earth: wrong continents, wrong oceans.

And technically it’s not an orbit. Jack is falling. Everything is getting hotter.

Comet Jack is a novel about a fifth-grader who literally falls into trouble, featuring:

Jack wants to keep his head down and stay out of trouble, but doing nothing means dooming a planet to destruction and his new friends to intimidation and torment. Jack must stick his neck out to help people he just met, both on the other side of the galaxy and around the corner at his new school. Every time he tries, though, he just makes things worse…

Comet Jack grew out of a serial bedtime story I improvised for my son each night. One night he said, "Hey, Dad, what if Jack had a different superpower on every planet?" I turned off his light and grabbed my laptop. I was hooked.

I wrote a book that I would want to read when I picked up my first novel, full of interesting, spirited characters that come alive in a world at once familiar and wholly alien--the kind of book that makes an eager new novel reader want more, more, MORE.

I hope you find Comet Jack exactly that.