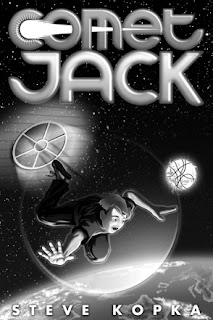 Yes, I'm working on it. No, it's not done. Yes, I really should have more completed by now. The summer got away from me.

What can I tell you? Just a bit. I don't want to give too much away. Also, I find if I tell the story too much before I write it, then it's not as fresh coming out of the pen (well, out of the fingertips into Scrivener, but let's not split hairs).

In the second book, Jack finds himself on an ocean world, among a sentient water-dwelling species who look at things a little differently than humans do. The action starts at the end of the school year, right before summer vacation. A new tension has built up between Jack and his nemesis, Dirt, and that tension's name is Jennifer Mitchell.

Oh, and there's something else going on Earthside: things are coming this way through the window.

But that's all I'm going to say for now.

I just submitted my YA SF novel to Strange Chemistry, the YA division of Angry Robot books. Angry Robot rules. Among other things, they just released Blackbirds by Chuck Wendig, a colorful and talented writer who also generously shares hilarious, NSFW, spot-on advice perfect for writers (like me!) who are trying to navigate publishing and improve our craft.

My novel Admirable Pursuit is for older readers--teens and up. I actually started it well before Comet Jack but finished it after. When I heard (via @ChuckWendig on twitter) that Strange Chemistry, the YA arm of Angry Robot, was running an Open Door, calling for unagented, unpublished, completed YA SF novels, naturally I jumped.

I had to jump. I heard about it with just four days left in the 2-week submission window (which ends today, April 30th).

As part of the submission process, Strange Chemistry asked for a one-sentence summary of the book. Admirable Pursuit is almost twice as long as Comet Jack. It is told through multiple points of view using short, punchy, action-filled chapters, with an interwoven twisty-turny plot set on two planets and a starship, against a backdrop of ultra-capitalist distopia/utopia (depends on your tax bracket). So, yeah, I couldn't imagine boiling it down to one sentence.

The elevator pitch might be: Indiana Jones meets Dune by way of Blade Runner... for teens!

Those of you pulling for me will be encouraged to know that's not what I put in the submission. After much hemming, hawing, and eyebrow pulling, here's how I boiled it down:

Admirable Pursuit in one sentence:

Wendy Veritage, the teenage heir to her Family's fortune, runs away to carve her own path in a future world of haves and have-nots, and ends up in the middle of a battle for humanity's future on a far away planet where a mysterious power allows people to experience their full potential.

Strange Chemistry will let me know.

Pepperjane Gingersnap is alive, thanks to the incomparable Jill Thompson! 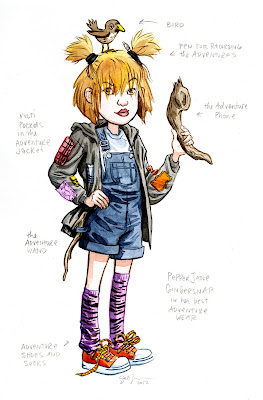 It would not be an exaggeration to say this illustration was created by the "World Famous Jill Thompson." Or "World Famous multiple-Eisner Award-winning Jill Thompson." Here are just a few highlights from her extensive and impressive artistic resumé: creator of Scary Godmother, creator of Magic Trixie, illustrator of countless comics (check out this upcoming Archie cover, for "Occupy Riverdale"). She's worked with Neil Gaiman on Sandman, then created her own successful Endless characters and stories. Last year, the National Cartoonists Society honored her with its prestigious Reuben Award for Beasts of Burden. Jill is the first woman to win a Reuben in the Comic Book category in the Society's 75 year history (that's a mind-blowing statistic right there). The list of her accomplishments goes on and on.

I'm lucky enough to know her (and her also World Famous multiple-Eisner Award-winning husband, Brian Azzarello) from a long-running dinner club where we take turns hosting and cooking 4-course meals. Yes, there appears to be a correlation between creative artists and excellent cooks. That's a different story though. 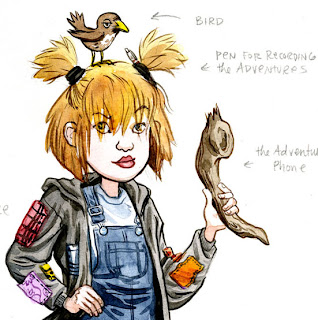 Jill has really nailed the character here, including many important quirky details. While I'm not sure Jill intended this particular illustration to make it into the book, it's so good that I'm already thinking we can use it somewhere, possibly on the back cover of the printed version. (And of course Jill gave me permission to post this here. Thanks, Jill!)

Needless to say this is all big, big news for Pepperjane Gingersnap.

"Who is Pepperjane Gingersnap?" some of you might be asking. Short answer: A capable adventurer and star of my (and now my and Jill's!) upcoming chapter book. Stay tuned for more details.

So I entered Comet Jack in Amazon's Breakthrough Novel Award Contest. It qualifies because it's self-published. Unpublished work qualify too. I basically did this because CreateSpace sent me an email telling me there were still spots open in the Young Adult novel category, and because it was super easy, especially since I already had a CreateSpace account. (That's who prints the books when people buy Comet Jack trade paperbacks.) 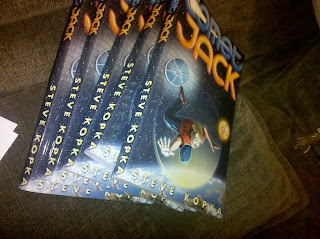 The contest itself surely exists in part to drive contest participants to self-publishing with CreateSpace. Perhaps that's why I'd avoided it years ago. However, now I'm already doing that, and must say I'm pretty happy with them. The books are high-quality (see the photo -->), and relatively inexpensive, and my investment in them is mainly time, time, time. (Yes, it's a lot of time, but at least it's not a lot of money, like in the old days when "self-published" meant "I spent tens of thousands of dollars so I can keep a bunch of copies of my book in the trunk of my car".)

The award itself makes some self-published people nervous. You get $15,000 (sweet!) and Penguin publishes your book (sweet!). However, they own the first rights to it then, and self-published authors are all about owning our rights. Basically, what you're winning is a one-book publishing deal. The potential downside? You might be able to make more money on your own.

I'm not as concerned about that right now, for several reasons.

First, I'd have to win. I do think Comet Jack is a good book (and Comet Jack #2, which I'm now working on, looks to be even better), but no doubt there will be many, many stellar entries. I believe there will be up to 5,000 entries to start, all first judged by their "pitch". (As in elevator pitch--300 words to hook someone's interest.)

Second, if I did win, the publicity and $15,000 would probably be worth what I'm signing away. (And I'll double-review that if it comes up.) I might not be as cavalier about this if this were my one and only Work of Art baby. I guess I kind of figure if I end up making a mistake and feel burned, I just won't do that again. I already have several more books "in the pipeline" (and by that I mean in various states of completion and editing). It's even possible that Comet Jack #2 will be on the virtual shelves, available for sale, before the contest is even over. Some other works certainly will.

Third, Comet Jack is still available for purchase during the contest period. Nothing has changed! Yes, under contest rules, I'm forbidden from shopping it to agents (and that certainly might turn some folks off who are pursuing that route), but since Comet Jack is already out and selling some copies, this doesn't bother me one bit.

So, there you have it. In case you were interested in how I justified entering this contest. You might also be interested to know that it took longer to write this post than it did to enter the contest.